It’s been two years since I found the contents of a footlocker that had been sitting dormant in my family’s basement for more than 60 years. The battered green box held the documents that accounted for the life of a man I had never met, my Grandfather. It contained the records for his service in the US Army during World War II as a correspondent.

He was embedded with the US 5th Army during the invasion and liberation of Italy from the first beach landing on September 9th 1943 until June 4th of 1944 as part of the force marching into Rome as the Nazis retreated.

My first reaction upon discovering this trove was to write a book. The history was well documented and I had the original and unpublished stories of a war correspondent to lend a real-life perspective.

The project – turned obsession – took me on a research trip to Italy one month ago. I was to follow the footsteps of my grandfather and some 400,000 troops that fought inch by bloody inch from the beaches of Salerno to the Eternal city. Monuments, cemeteries, museums and battle sites were on my list.

Through curiosity and a bit of luck, I met Luciano Bucci, the curator of a museum in Venafro also, the town Mayor and fellow history aficionado. As a local boy, he grew up scampering the heights of Mt. Sammucro, a linchpin defense position of the German Wehrmacht. He found a plethora of items left by both retreating and advancing armies. These became the first articles for display at his Winterline Museum and a life study of events that took place around Luciano’s town during the war. 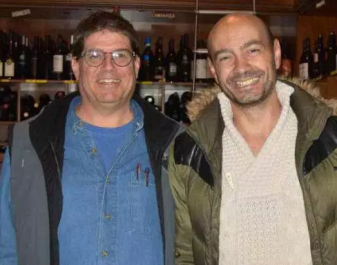 We spent a magical afternoon discussing a mutual passion. We parted as friends and with a pledge to advance both of our interests in keeping alive the history of the Italian campaign.

Luciano called me the next morning and asked if I would speak with a local reporter. Later that day, I met the writer, Antonio Nardelli, at a café in the village of Ausonia. We discussed my project and a brief timeline of my Grandfather’s Italian journey 77 years ago. He published his story in an online Italian magazine the following day.

I will use the trip to ensure I have a fact-based story. Meeting kindred souls, wishing to preserve the history, are experiences unto me.

More on the project:

One thought on “Writing History”